Drako and Nikki in the Sauna

‹ Previous Topic Next Topic ›
Posted by 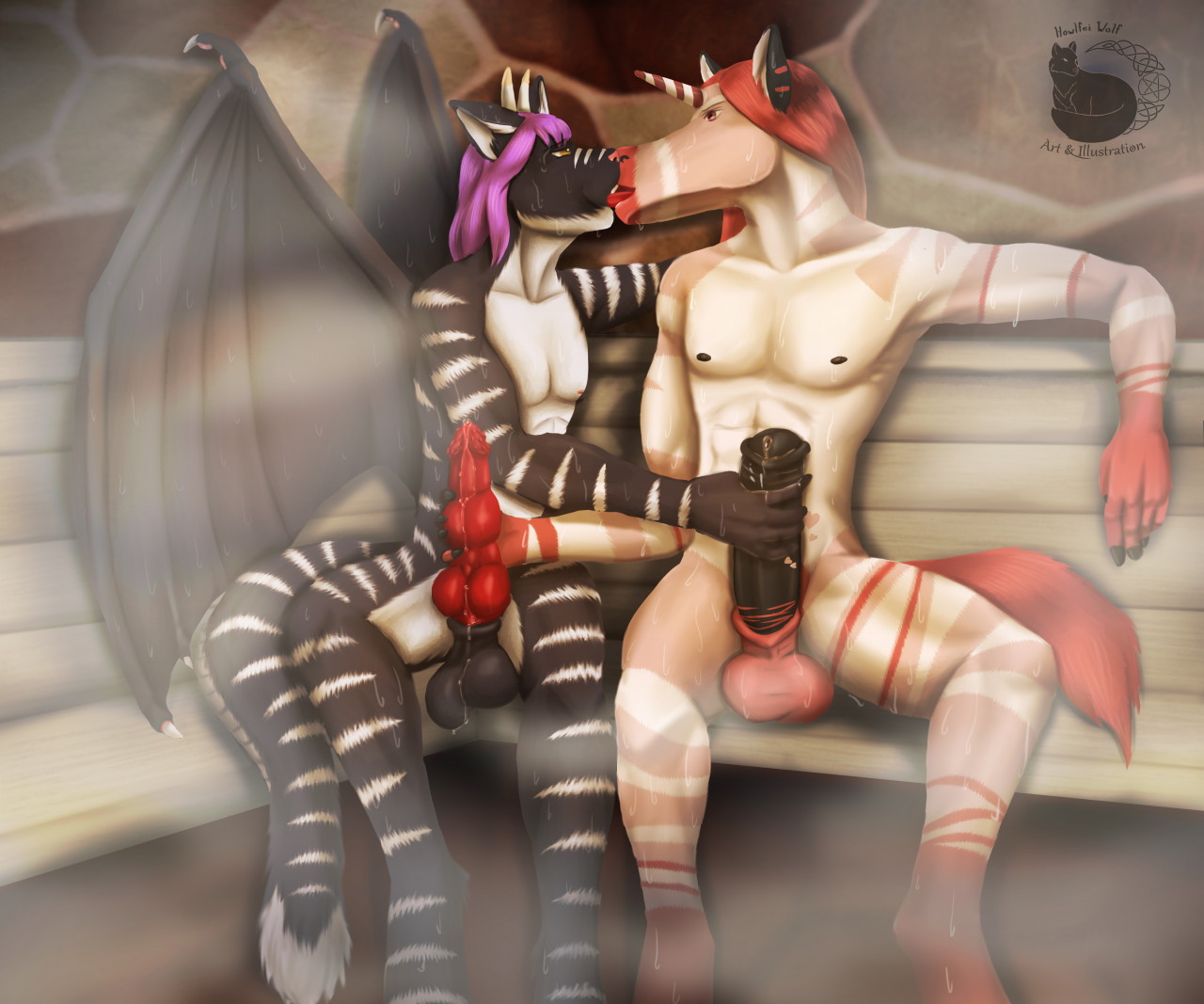 One day, Nikki noticed Drako wasn't in his chastity cage.  They decided to take Drako along to a nearby hot springs.

The springs were rather popular and busy, but also were aimed mainly at adults and fully clothing optional.
This made it the perfect spot for some public play, especially to intensify the sensations of teasing and other such activities.

Drako was all too happy to head to the hot springs, dipping into the hot water to help himself to relax.
However, Nikki had their own plans and slipped into the water next to the naked hybrid - also in the nude themselves.
Nikki then began to reach down and fondle the hybrid's thick, pent up sheath - in full view of a couple others in the springs.

Drako couldn't help but to moan out and rather quickly get fully erect under the hot water to the teasing touches.
He decided to reach down and tease the unicorn as well, feeling their sheath swell up and that equine cock slowly sliding out into the hot water as he began dripping precum.

The others watching were also getting aroused, but Nikki decided they wanted some private time with the hybrid.
So they led Drako into a small private sauna where they could enjoy the fun on their own.

The steamy sauna helped to ease the mood:
These two enjoying some privacy in the nice hot sauna with Drako out of his cage for once.
Leaving the cat hybrid leaking profusely from the attention on their unlocked member.
Nikki getting in some tongue action for good measure driving Drako dizzy with lust.

Soon Drako was leaking and spurting out a small puddle of precum as Nikki continued to stroke the hybrid's large, doubly knotted penis.
Though Drako was also getting a paw full of horse cock as Nikki also got fully erect in the sauna.
The kissing and the tongue only making them both not only steamy - but rather worked up.

Nikki didn't stop there, they took both knots and gyrated their hips a bit before sliding up, their own equine cock dripping pre and pulsing heavily.

After that short ride, they decided to push Drako back more and breed his tight cunt.
Thrusting hard into him until they flood his fertile womb with equine spunk.

However, they were not fully satisfied - so they pulled out and gave Drako another round.
This time filling his ass with another load of seed.

This caused Drako's half spent cock to spring to life once more, and another round of that thick cock sliding into unicorn butt - and another load of hybrid spunk filling Nikki.

After all this fun, they cleaned up a bit and began to head home.
However, Nikki decided to meet up with the other men who were watching in the hot springs and give them a card to where to find Drako's Den.

A few weeks after this spa day with Nikki, Drako felt a little funny and decided to take a test -- coming back to make him realize he now had a new passenger within his womb.

The story was a joint effort by Drako and Howlfei.
Drako is mine.
Nikki is a mascot for Drako's Den - https://cutt.ly/drako

Drako tends to hang out on Drako's Den Chat - and loves entertaining his guests.